Supplementary indications received a reprieve in 2007, and will now, subject to the Brexit deal negotiated with the EU, need to serve only the needs of the UK economy. Ronnie Cohen wonders where US influence is likely to lead us.

Supplementary indications are justified on the basis that they are necessary for trade with the United States and that if they were not permitted, a trade barrier would be created. This insistence on mutual acceptance of supplementary indications contrasts with the tolerance of different requirements for nutrition information and ingredients. Boxes of US and UK Pringles illustrate this inconsistency.

Supplementary indications are additional non-metric units that can appear alongside metric units. These non-metric units are voluntary in the EU and mostly appear on products imported from the US. Dual labelling is still a legal requirement for goods regulated at federal level in the US under the Fair Packaging and Labelling Act. 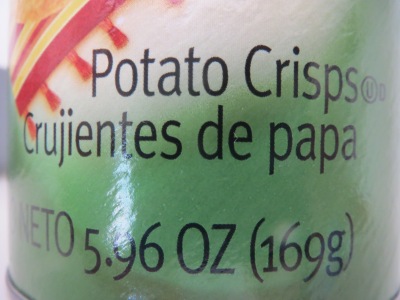 As you can see from the image on the box of Pringles, the product weight is expressed in both ounces and grams. As a result of discussions between the European Commission and the US government in 2007, the EU agreed to extend the use of supplementary indications to support trade between Europe and the US.

However, let’s look at the differences in nutrition labelling for the UK and US markets. The differences reflect different legal requirements.

While there are some similarities between UK and US nutrition labelling, there are considerable differences. These differences are described here.

Even though the UK and US ingredients lists look similar. there are some notable differences in the information provided. The British label provides allergen information (in this case, using capital letters), ingredients derived from genetically modified sources, E numbers (alongside descriptive names) and % of dried potatoes of the total contents. The American label provides none of this. Other differences in ingredients lists can be seen in the following table. Ingredients are listed in the order they appear on the labels.

On the British label, whole words written in capitals warn about allergens and words marked with * indicate that the ingredient is derived from a genetically modified source.

I leave you to spot other differences in these lists.

Other differences in the labels including format and layout, spelling differences (e.g. for words such as “flavour”, etc.), importer information and best before date.

A large number of differences in product labelling regulations exist between the United States and the European Union. The way that European importers solve this problem is to stick a label over the section with US nutrition and ingredients lists to conform with EU regulations. However, the British repeatedly argued that the abolition of supplementary indications would create a trade barrier between the US and the EU until they were permitted indefinitely in 2007. Why are potential differences in the use of supplementary indications seen as a trade barrier whereas other differences in labelling regulations are not? Surely, a sticker can overcome not just one problem, but both.