In December 2015, television weather forecasters expressed our record rainfall in millimetres while the national newspapers stubbornly stuck to inches. Apparently, the use two different measurement systems for the same phenomenon is alive and well in the UK. Ronnie Cohen looks at other aspects of British national life where two competing systems are used for measuring the same thing. 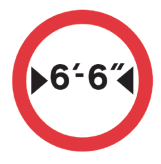 It is common to see both the imperial and metric versions of vehicle dimension signs alongside each other on many of Britain’s roads. However, the vast majority of private-sector vehicle dimension signs are exclusively metric. By insisting that the metric-only versions of these signs cannot appear by themselves on official traffic signs, the DfT is out of step with private practice. 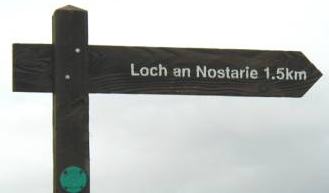 There are also a few dual signposts like the one shown above. One thing that is notable about the imperial and dual signs is the erroneous use of “m” for miles, influenced by the DfT’s use of “m” for miles on official traffic signs. The symbol “m” should only be used for metres, not miles, but some might argue that it is merely an acceptable abbreviation.

I took this picture outside Baker Street underground station in London. It was one of the most bizarre pictures I have ever found relating to British measurement muddle. That picture shows two signs to Madame Tussauds tourist attraction, one giving a distance of 100 metres and the other giving a distance of 370 yards. Surely, one of these signs is wrong. Once again, the private sector opts for metres which will readily be understood by overseas visitors while Transport for London uses yards, no doubt influenced by the DfT use of yards on all official road signs. I wonder what tourists would think of such muddled signage.

I found all three signs shown above in the same shop in Golders Green, London. I could not believe that a single shop uses imperial-only, metric-only and dual pricing. This is unbelievable. I have seen this kind of thing in different places but I have never seen it all in a single shop. I pity the poor shoppers who have to mentally convert prices from kilograms to pounds or from pounds to kilograms to compare prices just to find out what is better value for money. This could be avoided by using just one system of weights for pricing. Legally, kg must be used but lb can optionally be used alongside kg.

I found a vending machine at Westfield White City shopping centre where gold bars were on sale in quantities of 1 gram, 2.5 grams and 5 grams. Gold is sold and priced in troy ounces in commodity markets. Turn to the financial pages in almost any British national newspaper and you will find gold prices quoted in troy ounces. Before I saw this vending machine, I did not know that gold was also sold in metric quantities.

Tyre pressures are commonly measured in bars and pounds per square inch. You can find both for tyres. This is a good example of two competing systems, neither of which is widely understood. 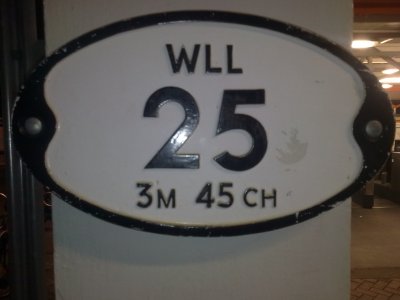 I took the picture above at a train station. It shows a measurement in miles and chains. While legacy railway systems use miles, chains, yards and miles per hour, modern railway systems such as the Channel Tunnel Rail Link (a.k.a. HS1) and tram systems use metric units.

Some sports such as rugby union, swimming and athletics use metric units worldwide while other sports such as football and horse-racing use imperial units in the UK.

Fuel efficiency is given in both litres per 100 kilometres and in miles per gallon. You can find both in car advertisements.

For large areas of land, especially farmland, acres compete with hectares for describing land area. While hectares are used officially, acres are in common use for farm sizes and among estate agents.

Similarly, when describing the floor area of offices and residential property for sale or rent, agents will use square feet or square metres. 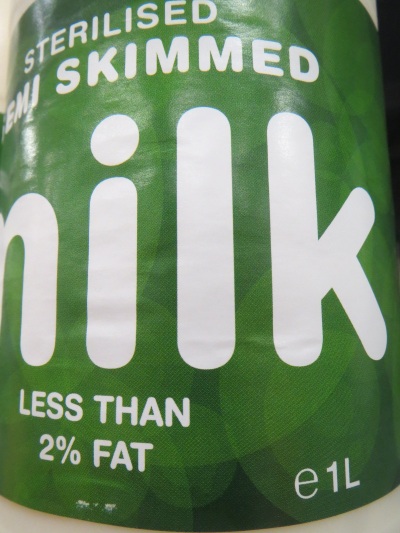 Of all drinks products sold in British shops, milk is the only one where the word “pint” appears. It is now rare to find pint-based sizes for any other drinks in the shops. Milk is the notable exception where litres and pints are both used for ranges of rational container sizes. 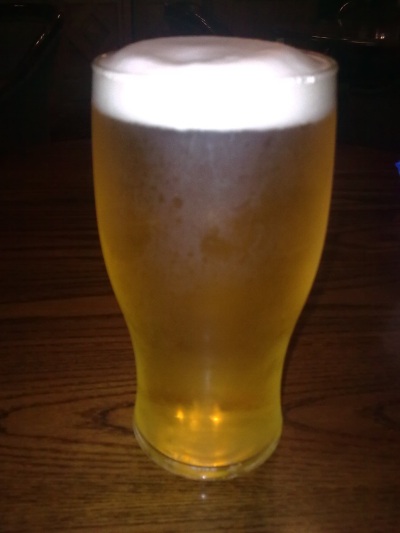 Wine and spirits are of course sold in pubs in metric measures.

This is a reminder that the measurement mess in the UK is alive and well and shows no signs of disappearing by itself. Without government action to resolve it, this mess will remain. Despite the fact that 50 years have passed since the start of the UK metrication programme, so many aspects of life remain a mixture of metric and imperial, including estate agents, small shops and market traders, official traffic and other public signs and much product advertising and descriptions. Currently, there appears to be no end in sight to this UK measurement muddle. When the authors of Magna Carta wrote “let there be one measure” could they have imagined the mess that would exist 800 years later?

42 thoughts on “The battle for measurement supremacy”