Ronnie Cohen provides us with an example from his work of the additional costs that businesses face as a result of having to provide for dual measures. Imagine how much better off we might be if all such costs in the UK economy and throughout the world could be avoided.

I work as a software developer for a small business that provides energy software solutions to gas and electricity companies. In that business, I noticed a number of features have been developed to support dual measurements. Over 50 extra lines of code have been written to support the use of Fahrenheit, in addition to Celsius, including conversions between Fahrenheit and Celsius in both directions. Over 50 extra lines of code have been written to include non-metric units and conversions, mostly between metric and non-metric units and almost 100 lines for supported conversions between metric and imperial units for imported data. A setting has been provided for users to express whether data is in Celsius or Fahrenheit in a couple of different places. Comments around the code are included in these figures but not the various locations in the code where extra parameters are included to support the use of dual units.

All this does not include discussions, technical and design specification documents, end-user documentation for these features and testing to support dual measurements. All this would be unnecessary if we just used one system and abandoned other units. As they say, time is money and all the time spent on these software features costs money. I have just described the costs incurred by one small business for the continued use of dual measurements. Imagine how much extra work has gone into supporting dual measurements in software systems that involve measurements across the whole of the software industry.

This phenomenon can also be found in common software products such as OpenOffice. I have found that they support both metric and imperial units in their software. I opened the Options window in OpenOffice and found that users can configure their software to use metric, USC/Imperial and other software-specific units (i.e. points and picas). Here are the images that show these settings: 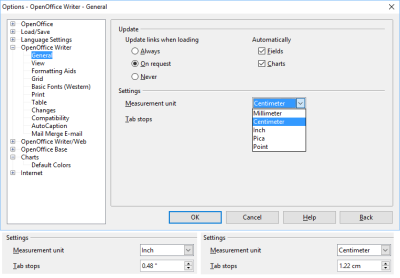 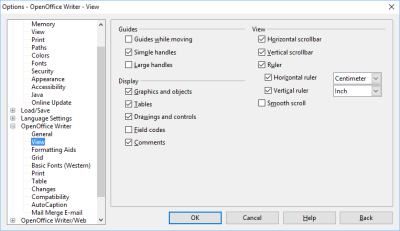 (Click on the images above to see them in full size.)

This does not include the length-dependent settings where users can set the number of centimetres or inches, based on their preferred measurement units. There are several of those settings too. No doubt, all the functionality that use these different measurement units also had to be implemented, not just coded, but planned, designed, documented and tested. And these are just some of the hidden costs of maintaining dual measures.