John Frewen-Lord, one of our regular contributors, has recently visited Canada and has sent Metric Views his observations on the current state of the metric changeover there. Comments on this article from readers who know Canada are particularly welcome.

Canada has always enjoyed (if that is the right word) a special relationship with the USA. But that relationship has undergone many transitions and changes over the 147 years since the country became independent from Britain via the British North America Act. Many of those changes have been instigated by Canada in its efforts to distinguish itself from its more populated neighbour to the south, while others have been imposed from outside as Canada developed as a country.

It is always easy to define Canada in terms of what it is not – it is not the USA and it is not Britain, even though vast elements of life in those two countries still form the bedrock of what Canada is today. As a result, Canada has constantly tried to forge its own path in making its way in the world, often in the face of significant opposition from the USA. Part of that path has involved the country in 1965 requiring everything to be labelled in both English and French, along with formally adopting the metric system in the 1970s, even though this was all at odds with the USA’s strong influence on Canada’s way of life, especially in regards to trade between the two countries, along with associated codes and standards.

Pierre Trudeau was perhaps one of the most iconic of Canada’s Prime Ministers in the twentieth century. A strong federalist, he mapped out a vision for Canada in the 1970s that was much more internationalist than before. He embraced multiculturalism – not always successfully, and perhaps with his own agenda in mind of creating a ‘client state’ that was philosophically beholden to his Liberal Party that governed Canada for more years than the other parties. But one cannot fault his belief in creating a Canada that was far more self-assured than at any time in its short history. In particular, Trudeau wanted a Canada that was much less dependent on the USA, economically, culturally and politically.

But the easy access to US markets, primarily via the border between the two countries colloquially known as the 49th Parallel, was simply too enticing to subjugate in favour of the more difficult markets overseas, and so the original Free Trade Agreement (FTA) with the USA was born at the end of the 1980s, masterminded by a much less nationalistic Conservative Prime Minister, Brian Mulroney. In spite of the fact that the FTA was extremely flawed, with too much in the USA’s favour (viz. the ongoing softwood lumber dispute), Mulroney managed to use the Conservatives’ large majority in the House of Commons to get the Bill passed. With strong influence from the USA, along with cheaper American imports made by companies already catering to a market ten times larger than Canada’s, the exclusive use of the metric system, at one time almost completed, inevitably declined.

So how do Canadians feel today about the country’s metrication status? Having lived there until the beginning of the new millennium, and having just returned from my annual visit, I can report that, while use of the metric system is not what it once was, it seems currently to be getting no worse. Metric usage appears to fall into two main categories. Anything that is official or put out by large and often multinational companies or broadcast or published by the media will at least show metric units alongside Imperial, and as often as not, will show the metric first, or even exclusively (especially the media). On the other hand, a lot of retail trade (particularly DIY and residential construction materials) is conducted in Imperial, or even US Customary (reflecting the disappearance of true Imperial and the consequential informal and unofficial adoption of the American units). Canadians, like their British counterparts, are quite ambivalent about whether to use Imperial or metric units in everyday conversation, and you will often hear both in the same sentence.

The following are a few pictures of metric usage in Canada in 2014.

WestJet is a western-Canada based airline that is run on very similar lines to Southwest airlines in the USA. Sometimes known as cowboys, they certainly fly their planes very aggressively, as I found out when I flew with them from Ottawa to Toronto. This image is taken from the July issue of their house magazine.  As can be seen, metric predominates, and is exclusively used for the French text. 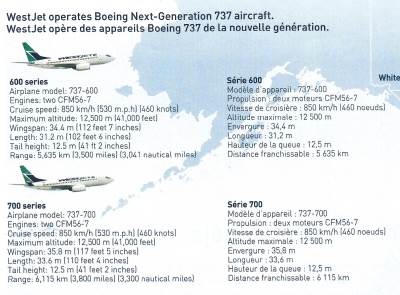 At Canadian airports, only metric units will be seen, whether it be specifying the maximum volume of liquids that can be carried on board (100 mL), or on the departure displays in the terminal, as the following picture at Ottawa airport shows. 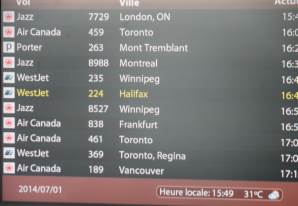 The roads are still as metric as possible, and I heard no-one talking anything other than km, km/h and L/100 km. This was taken from the front passenger seat of my colleague’s car in the Ottawa region.

Retail advertising on the other hand is not nearly so metric-friendly. This image is from a Canadian Tire (large DIY and automotive chain) flyer, showing a mix of metric and Imperial:

The use of French and English together results from the stores covered by this flyer being in the Ottawa area, where you are likely to hear French being spoken more often than English – in the Toronto area the equivalent advert would be in English only.

Will Canada’s use of the metric system change in the future? It might very well. An Editorial on 24th June in the Globe and Mail, a centre-right broadsheet, postulated on the changing relationship with the USA. In particular, it noticed that Canada is, finally, looking far beyond the 49th Parallel in its trading patterns, exhibiting in the process a new-found confidence in trading with China, Japan, Korea and other far eastern countries. Such new trading patterns will require Canadians to start making the use of metric units the default.

The new leader of the Liberal Party in Canada, which is predicted to win the next federal general election, is none other than Justin Trudeau, son of Pierre. Will Justin follow in his father’s footsteps? That of course remains to be seen, but it does seem that Canada just may just start looking much more west across the Pacific rather than south to the USA. Pierre would have been pleased.

(Editor’s note: due to limitations inherent in the software used for MV, two of the images lack detail. Originals can be provided on request.)

6 thoughts on “The 49th Parallel – still a line in the shifting sands?”