John Frewen-Lord follows his article reflecting on his visit to Hong-Kong with another about two of the countries that once formed French Indo-China.

I recently spent a total of 18 days on an extensive tour of these two countries. In all of that time, not once did I come across a single instance of non-metric usage. Considering that both of these countries (but especially Vietnam) were occupied by American forces during the Vietnam War and the Cambodian Campaign, this came as a bit of a surprise.

But it shouldn’t have done so. During the Vietnam War (which the Vietnamese call the American War, to distinguish it from all the other wars in the country’s history), some 60% of the male population was wiped out. A whole generation was essentially lost. The result is that today over half of Vietnam’s 93 million population is 25 or younger. And they have never had any contact whatsoever with non-metric measurement units.

Cambodia, whose development is about 25 years behind that of Vietnam, suffered similar devastation to its population, this time under the despotic rule of Pol Pot, who slaughtered untold millions of the country’s citizens. Again, a whole generation was lost, and only now is Cambodia rebuilding its human resources. Like Vietnam, the majority of its current population is young. And solely metric-educated.

Which may explain the use of only the metric system in these two countries – there are a few of the older generations using ‘legacy’ units of measurement (whatever they might have been). Consequently, no-one uses – or even knows – anything other than metric units. Even the old ladies working on market stalls and the like used scales that measured in kg only.

Vietnam in particular is a country very much on the ascendant. Its population is intelligent, resourceful and dynamic, while a major program of industrialisation is under way. Countries like the UK refusing to complete metrication need to be aware that South East Asia, especially countries like Vietnam, will leave them behind if this part of the world that is resolutely metric continues progressing at its current pace.

One man on our tour was an ex-Brit living in the USA, who refused to use or even attempt to understand metric units. On a trip on the Mekong river on a fairly small boat, the boat’s captain asked each of us how much we weighed, and then told us where to sit, in order to maintain the boat’s stability. Almost all of us – mostly Aussies, Kiwis and Brits – were able to give our weights in kg (there was a bit of a discussion among a British couple in converting stones to kilos, but they got it right pretty quickly). The sole exception was our ex-Brit, who proudly gave his weight as 200 pounds. The captain again asked how much he weighed. Realising that 200 pounds meant nothing to the captain, the culprit looked to me, whereupon I made the conversion to kg.

Our tour guide, a Vietnamese young man in his late 20s, spoke in metric terms exclusively. This was also true for bus drivers, boat crew, hotel staff, shop keepers, market stall holders, etc. – in fact anyone I came into contact with.

The following shows many of the signs I came across, as well as some comments. Note that many road signs were taken through the side windows of moving buses on sometimes bumpy roads, so if some pictures are a bit blurred or taken at strange angles, please bear with me! Also to be noted is the somewhat casual mixing of upper and lower cases, both private signs and those erected by the authorities. Obviously a little work needs to be done here in getting metric usage right. Road signs in Vietnam were exclusively international in style, including the use of a yellow background on triangular warning signs. Click on the images if you wish to enlarge them.

Typical information board at the War Remnants Museum, Saigon.

A couple of private signs in Hué.

At a bespoke tailor’s in Hoi An.

Sometimes they get it right – and sometimes not. 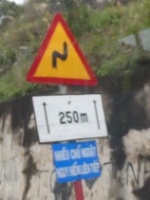 On the Hai Van Pass.

Pity about the incorrect use of upper case. 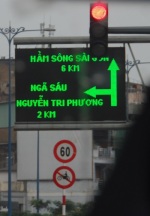 In Vietnam? Not a chance…

Like Vietnam, the population in the Kingdom of Cambodia, around 15 million, knows only metric units – imperial values mean absolutely nothing to them. Our Cambodian tour guide spoke exclusively in metric units only. On occasion, our ex-Brit asked him to convert some values to imperial units, but his request was met with a blank stare. (Not to mention that the Aussies and Kiwis were becoming visibly annoyed at his obstinacy.)

Road signs were a mix of North American (or Australian) for warning signs (yellow diamond), and international for regulatory (red-rimmed white circle). As in Vietnam, the use of upper and lower case letters was haphazard.

Around 15% to 20% (possibly more in rural areas) of all cars, vans and trucks were right hand drive, imported from neighbouring Thailand. This practice has been stopped for some time, and today what little vehicular cross-border traffic there is consists mostly of either large trucks with special permits, or government vehicles. At the border into Thailand, we had to change buses, as left hand drive vehicles are not allowed in Thailand. In the ‘no-man’s-land’ between Thai and Cambodian border controls, only one vehicle is allowed in at a time, making the transition from right to left side of the road or vice versa. In the hour it took to exit Cambodia and enter Thailand, I saw just two vehicles go through, an SUV on Thai government plates, and a large truck. On the Thai side a large queue of trucks was waiting to cross into Cambodia. 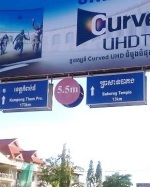 Not all height restriction signs were of this style.

Probably the most ignored sign in S E Asia.

Every major roundabout in Cambodia had a huge statue on the lines of this one, depicting some aspect of Cambodian culture.

10 thoughts on “Vietnam and Cambodia – metric measures taken for granted”