We look at the metric changeover in the UK construction industry, and some of the posters that were part of it.

The comments that followed our last article included variations on the word “convert” about 25 times, including eight in upper case. There are, of course, occasions when it is necessary to convert, but it is best avoided. So this week, Metric Views takes a look at the metric changeover in the UK construction industry between 1967 and 1975, and the accompanying poster campaign run by the Construction Industry Training Board (CITB) on the theme, “Think metric”.

Imperial measures were less than ideal for construction. Setting out was done in feet, inches and eighths, with risks of error during addition and subtraction. Levelling however was done in feet and hundredths. Excavations were measured in feet and inches, but volumes were calculated in cubic yards, without calculators. Laboratory work may have been done in metric, but design calculations were in Imperial. Readers who worked in construction during the 1960s can probably add to this list.

So in 1965, when the UK Government said that they “consider it desirable that British industries on a broadening front should adopt metric units”, there was widespread agreement in the construction industry that it should aim to be at the head of the queue.

Preparation was thorough. Standards, design codes, publications, university and college courses, qualifications, training, publicity, product development, modular co-ordination, the supply chain, and so on – all received consideration. An agreed timetable was published in 1967.

Clearly the workforce would play a key part in the success of the changeover, and the CITB was commissioned to devise a poster campaign with twin themes: ‘Think metric’, and ‘Use millimetres’.

The importance of ‘thinking metric’ during a changeover from older measures had long been recognised, but an emphasis on millimetres was unusual. However, the construction industry had concluded at an early stage that the use of the centimetre should be avoided. Among the reasons was the fact that using the centimetre risked error from misplacing or omitting the decimal point, with 1/8 inch and 1/100 foot both being about 3 mm. The CITB also foresaw that anyone unfamiliar with the metric system might see the centimetre as the metric version of the inch, and would tend to use it unless encouraged otherwise.

Our first two posters show both of the campaign themes. The five postage stamps in the left hand poster are each dimensioned “20 mm”.

Our third poster would perhaps be controversial today – it shows how attitudes have changed over the past 45 years, and clearly belongs to a bygone era. But it also underlines the ‘Use mm’ theme. Even today, the general public might expect to see centimetres if such statistics appeared in metric measures.

In 1961, the Meteorological Office switched internally from Fahrenheit to Celsius, and in 1962 started issuing public forecasts in dual units. But, although science had been metric since 1900s, many industrial processes still used F. So it is understandable that the CITB would wish to draw attention to a temperature scale that might be unfamiliar. It is surprising, however, that there are still people in the UK today who claim Celsius is unfamiliar!

And finally, here is a play on words that might be appreciated by someone who had spent the day working in the sun on a building site. We shall be returning to the idea of ‘Drink metric’ in a future article. 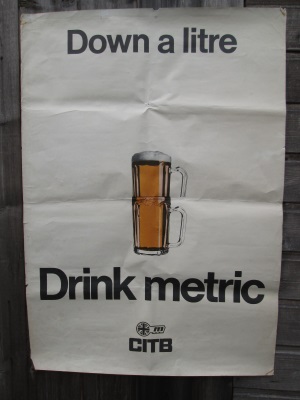 The metric changeover in the construction industry was a success, and was largely completed on programme. The benefits were quickly felt. As an example, UK consultants such as Arup and Fosters went from strength to strength in an increasingly metric world.

So here is a paradox. All new roads in the UK for the last 45 years have been designed in metric, generally for speeds of 50, 60, 70, 85, 100 and 120 km/h. But just before completion of construction, Imperial signs for distance and speed are installed. Furthermore, almost all the vehicles on UK roads today have been manufactured to metric designs, with those intended for the UK fitted, uniquely, with RH drive and an mph option on the speedo. Yet the metric is largely hidden from the driver, who could be forgiven for thinking that little has changed in this respect for 50 years.

63 thoughts on “‘Think metric’. A customary way to success”