Happy New Year to all our readers.

In this article, the Editor explains the reason for the absence of new posts on MV in recent weeks. This leads to a discussion of a issue that few of us, perhaps, have encountered.

“During late November and early December, I was assisting one of my sons with the renovation of a row of cottages that he had recently acquired in the French Alps. He was keen to take his family there over the Christmas break, but there was much work that needed to be done to make this possible.

From 1967 to 1975 I had been working in the construction industry while its switch from imperial to metric was taking place. A decision had been made early in the changeover to work with units in multiples of 1000: mm, m and km; mL, litres and cubic metres; g, kg and tonnes; N, kN and MN, and so on. No ccs, cL or hectograms. This had a number of advantages for construction including a reduced risk of confusion and the avoidance of the need to add units to dimensions on drawings.

However, my son who attended school in the 1980s had grown up with a “whatever works for you” version of the metric system, and centimetres definitely worked for him.

Readers may remember the “Metric Sense” campaign led by Anne Attlee in the 1980’s and 1990’s, which also encouraged the use of the units that people were comfortable with. This was an attempt to overcome some of the hostility to the metric changeover that had become apparent in the early 1980s. In particular “Metric Sense” advocated the use of centimetres in replacement of inches, a metric unit taking the place of an imperial unit of similar magnitude.

How would this play out when the DIY duo went to work?

Initially, it appeared that UK construction had done the right thing 50 years earlier:

And so on. It took us a while to get used to each other’s thinking, and we wondered how the French managed. The local DIY store provided some clues (and a breathtaking view from its car park – British DIY enthusiasts are allowed to be envious).

Here are some shelf labels in the store: 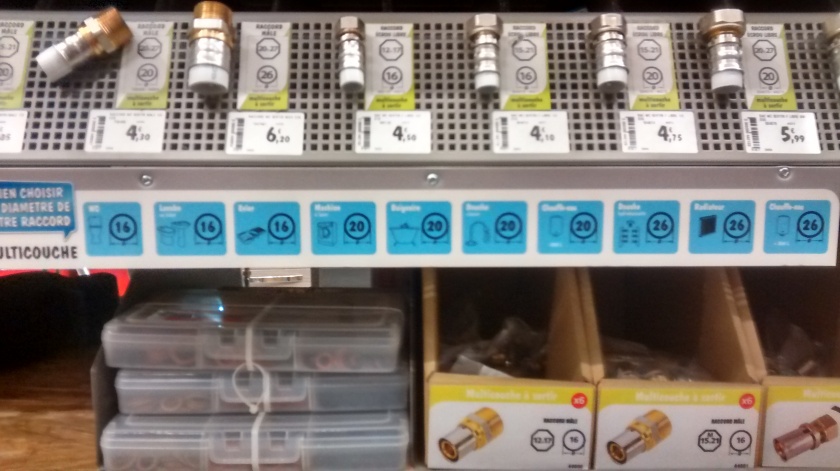 So it seems the French go in for “metric sense” too. Which reminds me of an incident early in the 1970s. I was then working in the London office of Arups on the design of Centre Beaubourg, later renamed Centre Pompidou, in Paris. The UK had been one of the first countries in the world to adopt SI. French engineers visiting the London offices said they had no difficulty with our use of millimetres, but they were really struggling with kN for force and N/sq mm for stress. But that is another story.

And the Alpine DIY project? Significant progress: a new concrete ground floor, provision of a hot water system, bath, flushing wc, new staircase, rewiring (by a French contractor) and upgraded insulation. Plus massive snowfalls. I am told the holiday was a great success.”

7 thoughts on “Alpine DIY and the generation gap”